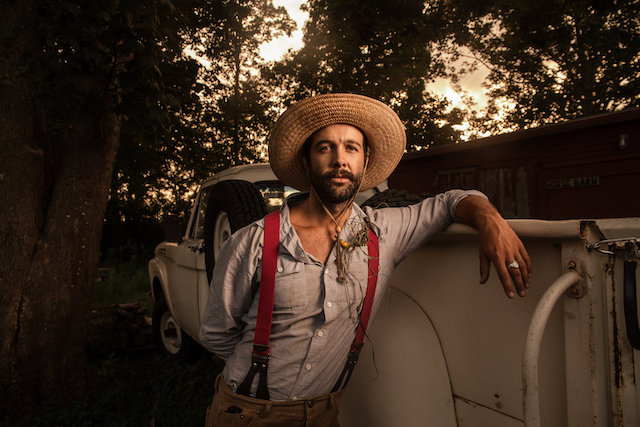 Peter Treiber Jr. recalls his father planting a vegetable garden with a handful of fruit trees and tending to beehives at his childhood home in Sea Cliff.

That hobby yielded fresh food that found its way onto the Treiber family dinner table every spring and summer throughout his youth. The home harvest also seeded a passion for growing and sharing bounty that would become the foundation for the family’s next venture: organic farming.

Peter Treiber Sr. founded Treiber Farms in Peconic in 2014. The Orient resident was eyeing retirement from his family’s Brooklyn insurance company when he acted on a longtime dream of purchasing land for farming. A 34-acre plot on the north side of Route 48 neighboring Hidden Lake Farm Riding School, was the perfect match.

“I always really enjoyed gardening,” the now retired Treiber Sr. said. “My family is philanthropic and the idea of feeding people and feeding them locally has always been exciting to me.”

The farm had lain fallow for roughly a decade before Treiber Sr. acquired the property. With no background in farming, his rehabilitation of the land was slow. He spent the first year clearing overgrown brush. Two seasons of planting cover crops were followed by creating the rows and irrigation system that would become the foundation of the Treibers’ orchard and berries.

“I really saw the land as a blank canvas that we could really explore,” he said. “The community has been very supportive. Everybody from the USDA to Cornell Cooperative to [local farmer] Steve Mudd — there is a Rolodex of really good people who pick up the phone and help lend a hand.”

Treiber Jr., who studied history and anthropology at the University of South Carolina, was living in Brooklyn and working as a collage and sculpture artist at Invisible Dog Art Center when he signed on as full-time farm manager in 2016.

“I’d been interested in farming for a couple years … I started thinking a little bit more about where my food came from,” he said. “I’m learning by just doing. It was kind of just like, wing it. I don’t know how else to say it. We knew we were going to have berries. I didn’t know if we were going to sell anything, which was one of my biggest fears.”

The Treibers purchased a house opposite the original land — where Treiber Jr. lives with the farm’s two field hands — and acquired the barns neighboring the home in 2015. The property came with the iconic American flag truck that makes the farm identifiable from the road.

Together — through some trial and error — father and son have grown the farm into the 50-plus-acre operation it is today. The land is planted with a variety of “beyond organic” berries, fruits, vegetables, herbs and edible flowers and its products range from eggs to honey to an assortment of jams and preserves. Recently, they also recently added a herd of beef cattle in collaboration with Acabonac Farms in Amagansett and are experimenting with growing different types of grains and mushrooms.

Treiber Jr. describes the term “beyond organic” as more than a farming practice, but a way of life. The no-till farm practices sustainable farming methods without pesticides — although the farm is not certified organic. The goal is to work with nature as stewards of the land, rather than against it, he said.

“When you think about it, how could you responsibly start a farm, in 2016, and not at least try a little to do it without [chemicals or pesticides]?,” he said. “I don’t like being told that you can’t do something. We were told you can’t do this organic, that organic, and I’ve just asked, ‘Has anyone tried?’ We have.”

Their experimentation in the field over the last four years has yielded success. Treiber Farms sells most of its farm-fresh ingredients wholesale to local chefs and restaurants, including North Fork Table and Inn, Caci and First and South — to name a few.

“I took time meeting people over the winter and when it came to springtime, I just went back to some restaurants and some farm stands that were interested in wholesale,” Treiber Jr. said. “Me coming out here so late in the game, I saw a wall. I met bunch of cool farmers and I thought they must have all their connections. But that’s not the case. There’s a lot of restaurants looking for better or more consistent sources of food that are organic.”

First and South in Greenport was the Treibers’ first client in the local restaurant industry. Owner Sarah Phillips coached Treiber Jr. on the nuances of bringing their produce and products to area restaurateurs and chefs, teaching him how to sell the provisions wholesale.

“I met Peter [Jr.] and his sister before I saw their product and they were so enthusiastic,” she said. “It was their commitment to local agriculture that made me want to work with them.”

Phillips said her restaurant uses the Treibers’ mixed berries for a variety of menu items and cocktails.

“The [berries] are simple, straightforward and delicious,” she said. “When you know someone doing something with integrity and thoughtfulness, you want to pass it on to your clientele. If you have a business out here, we’re all trying to prop each other up.”

Partnering with the community has been a cornerstone of the business. In the spring, the Treibers donated a 50-by-100-foot garden plot near the American flag truck to the Episcopal Ministries of Long Island’s Common Ground project. The garden is meant to provide locals in need with fresh fruits and vegetables they might not otherwise be able to enjoy.

“Working with the community is so important,” Treiber Sr. said. “That is really what it is all about.”

Treiber Jr. also uses one of the barns as a workshop for his art and offers another barn as a space to screen independent films, showcase musical artists and other creatives from the North Fork and beyond.

“We had a concert with a band called Deltaphonic and they’re from New Orleans,” Treiber Jr. said. “We had a screening of a film that just hit the film festival circuit, called ‘In Reality.’ We were the second public viewing ever. We did a tour and potluck for 15 farmers.”

Treiber Jr. hopes to continue these types of events and collaborations in the future, in addition to keeping up the farm and its wholesale business. A traditional farm stand is not in the cards at the moment, he said. They gave it a shot early in the year, but chose to focus on other aspects of the business.

“It was interesting going through our records from last year, the invoices, a great diversity of things, and it will help us sort of formulate our identity, because I don’t know who we are just yet,” Treiber Jr. said. “I always believe, in a lot of ways, the process will inform the product and the identify of who you are and who you’re going to be. It is in that process that you’re enlightened some way, informed some way. Some people are like ‘Oh, you’re living the dream, man,’ and I’m like, ‘It’s totally available to anyone who wants it.’ ”