For Claudio’s in Greenport, the arrival of the Tall Ships is also a reminder of their nautical heritage from across the pond.

The Sagres, a 300-foot Portuguese sailing vessel that will arrive in Greenport as part of the 2015 Tall Ships Challenge, has particular meaning for the Claudio family, which has owned its historic restaurant for 145 years and will sponsor the ship.

In the 1800s, Greenport was a well-known whaling hub that welcomed vessels from all over the world seeking a safe harbor or the replenishment of supplies. The Portuguese whaler Neva, which set sail from Fayal in the Azores, docked in Greenport in 1854 with a young whaler on board.

That man was Manuel Claudio, who saved his earnings to open Claudio’s Tavern in 1870.

“This is going to be a fabulous weekend that people will remember for the rest of their lives,” co-owner Janice Claudio in a press release. “The sight of so many extraordinary vessels in the harbor will be unlike anything we have ever seen. It is particularly exciting for Claudio’s to sponsor the Sagres, which nods to our Portuguese origins.”

Since 1870, the restaurant has had a family member at its helm and has since expanded to open three restaurants on the Greenport waterfront, with the national landmark Claudio’s Restaurant and the waterfront eateries Claudio’s Clam Bar and Claudio’s Crabby Jerry’s.

“The tall ships festival is exciting in itself,” said co-owner William Claudio Jr. “Having the opportunity to connect our family’s heritage with the arrival of the Sagres is going to make this an unforgettable event.”

As Greenport Village prepares for the arrival of the tall ships, the Claudio family will welcome the ship’s captain and crew upon their July 3 docking in the harbor adjacent to Claudio’s Wharf. It’s almost time to Shellabrate once again in Greenport 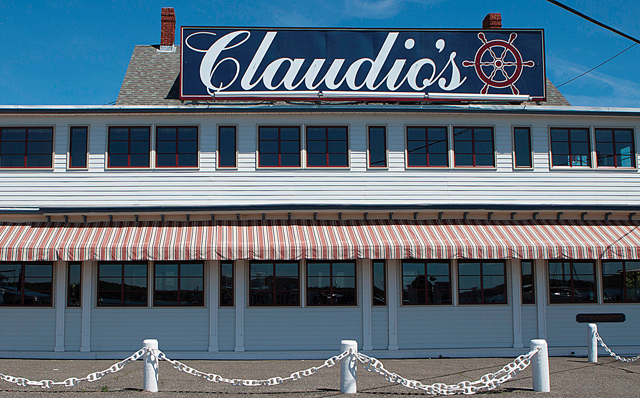 The new management team at Claudio’s is making good on its promise to elevate... Pizzeria Baccano serving up Brooklyn slices at Claudio’s in Greenport

One of the North Fork’s most recognizable waterfront restaurants will once again be a...