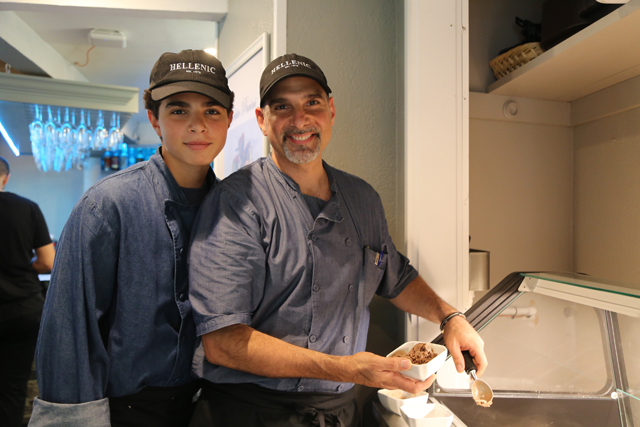 Hellenic Snack Bar & Restaurant owner George Giannaris is turning to YouTube to share his 40-plus years of tips and tricks for whipping up healthy meals at home.

The AwareHouseChef YouTube cooking channel, launching April 26, aims to help home cooks of all skill levels prepare recipes that are both time and cost effective. Each week, Giannaris invites viewers into his home to learn the ins-and-outs of healthy cooking.

Episodes include lessons on technique, such as knife work and first-hand advice on how to buy organic ingredients in bulk to save on groceries. Some of the episodes will also feature guest spots and will be shot on location at other notable North Fork businesses.

“Healthy eating has always been a way of life for me,” Giannaris said. “Growing up Greek, and in my family, we ate simple and, for the most part, organically. We are blessed to be on the North Fork where we have access to harvests that aren’t overly processed and full of chemicals. I want to show people how to eat healthy so it isn’t daunting.”

Giannaris has been toying with the idea of launching a YouTube channel to share his chef’s knowledge for seven years, and decided the time was right to help educate the public about nutrition after a recent trip to a big-box grocer.

“There was a health warning label on the flour, and I was thinking, ‘Why are we eating this?’” he said. “I want the world to know more about what we’re eating because it is how we’re getting our nourishment. I am shooting the videos in my kitchen at home. I want to show people that it doesn’t need to be expensive, and you don’t need a commercial kitchen [to cook healthy meals].”

Giannaris, The Suffolk Times’ 2017 Business Person of the Year, is no stranger to innovative new projects. He runs Hellenic, the restaurant his parents founded in 1976, with an eye for identifying areas of growth while preserving all the things that make the snack bar so iconic, such as the famous lemonade it’s been pouring for decades.

See the trailer for AwareHouseChef:

Two years ago, he began making homemade gelato for Hellenic for the first time. He has also spearheaded special community events for the restaurant, such as The Battle of Beers night held last Friday, which encouraged the public to taste and choose the local brews that would be on tap for the summer, free of cost.

The father of two said his motivation for trying new things while preserving the past stems from his desire to make a positive impact on the next generation.

“A long time ago, I was watching [PBS] and this guy said one thing that changed my life, ‘My children and yours are our children’,” he said. “As silly as it may be, it is profound because we have one thing in common: producing a generation of people … and instilling a passion and desire to move their generation forward.”

Becoming a YouTube chef, Giannaris admits, was a big challenge. He got some help from tech savvy friends in the film industry, but had to learn everything from lighting to filming and editing video to create the first 14 videos he has on cue — and there is more to come. One video will be released each week starting Friday, April 26 at 8 p.m.

Viewers can tune in at AwareHouseChef on YouTube. There will also be a special premiere party at Hellenic to celebrate the launch of the series. From 7 to 9 p.m., the restaurant will be serving complimentary appetizers and refreshments as the first episode is aired on a projector. The premiere party is limited to 70 people, call (631) 477-0138 to see if space is available.

This week’s episode was brought to you by Peconic Bay Medical Center: One week... Now you can get creamy, indulgent gelato along with moussaka, pork souvlaki or rack... Here are a few places to check out on the North Fork and Shelter Island...