A month after abruptly closing their popular Southold restaurant, the owners of Caci North Fork said they are planning on a spring reopening.

But changes could be in store for the acclaimed eatery, which opened in 2014 and expanded to a second location on Shelter Island earlier this year.

“Caci North Fork has been in existence for four years and for the first time we are taking this pause for the winter season,” said Daniele Cacioppo, who owns the restaurant along with her husband Anthony, and his brother Joseph and his wife Kelly.

Ms. Cacioppo said the closure during the slower winter season will “allow ourselves to take a thoughtful look at where we are, the roots of our vision and original mission and staying on course with moving forward.”

When asked if Marco Pellegrini will continue on as executive chef, Ms. Cacioppo wrote in an email interview that he’s “part of the discussion.”

“After forging a relationship in Italy, we provided him and his family the priceless passage to America in order to create their new beginning and an opportunity to be part of our vision,” Ms. Cacioppo wrote. “We have enjoyed working together with him on the development and implementation of this exciting project. We truly appreciate his commitment through the years as the operations manager and executive chef.”

Ms. Cacioppo’s comments come two weeks after Osprey Bar & Lounge opened at the former Caci Shelter Island. The outpost, which was also overseen by Mr. Pellegrini, had opened this summer and was expected to be a year-round venture at the Shelter Island House.

Ms. Cacioppo said when it reopens this spring, the Southold restaurant will be the only Caci location.

The closing of Caci came without much fanfare. A story appeared in Newsday about a week before the Southold location closed for the season, but the owners hadn’t said anything else publicly about their future plans.

Ms. Cacioppo said they’ve been meeting to plan for the season ahead and do hope to resume posting to social media later this month with future plans and, eventually, an opening date.

The Caci news comes at a time when several other North Fork restaurants have closed. Deep Water Bar and Grill in Greenport, Mazi and J&L’s Chicken, Fish and Ribs in Riverhead, and North Fork Bacon & Smokehouse in Wading River have all permanently closed. Deep Water closed after the building was sold to the owners of the neighboring Green Hill Kitchen and Industry Standard restaurants. The owner of North Fork Bacon & Smokehouse said he’s focusing on catering efforts.

Two beloved dessert spots also recently closed, as Sandpiper Ice Cream in Greenport served its last cone after nearly 40 years in business and Orient will no longer serve as the seasonal outpost for Brooklyn’s Four & Twenty Blackbirds. An owner of Sandpiper Ice Cream said she wasn’t ready to talk about the closing yet.

Late fall is typically the time for restaurants to close seasonally on the North Fork or to call it quits for good, but there’s also been some news of late of upcoming restaurant and tasting room openings.

North Fork Roadhouse hopes to open this summer in the former Porto Bello spot on Route 48 in Mattituck, the same hamlet where Boom Burger is planning to reopen “after Christmas.” In Greenport, approvals have been given to Pearl — a proposed restaurant on Main Street — and for a Sparkling Pointe tasting room on First Street. Greenport Distilling also recently opened on Carpenter Street. In Southold, a liquor license application has been submitted for Days of Wine and Roses at a space on Main Road and Maroni Cuisine, a popular Italian eatery in Northport, has plans to open a new location at the former Jeni’s Main Street Grill this spring (Jeni’s moved earlier this year to the former Six Three One space in Southold).

Expect dine-in service similar to Northport at Maroni Southold, but the owners plan to put emphasis on their signature take out item: hot pots.

The enamel to-go pots are filled with Italian specialties such as 100-Year-Old Recipe Grandma Maroni’s Gourmet Meatballs. The pot is yours to keep.

“We are going to focus more out here on the take-out portion of what we do in Northport,” said owner Maria Maroni. “We really want to serve the year-round community and we see a need for it here.

Michael Maroni — Maria’s husband — has served as chef at the Northport location for 18 years. The couple resides in Southold and purchased the Main Road building about five years ago.

“We live out here and this has been a dream of ours to bring what we do to the place that we love,” she said. “We are here to serve the community.” 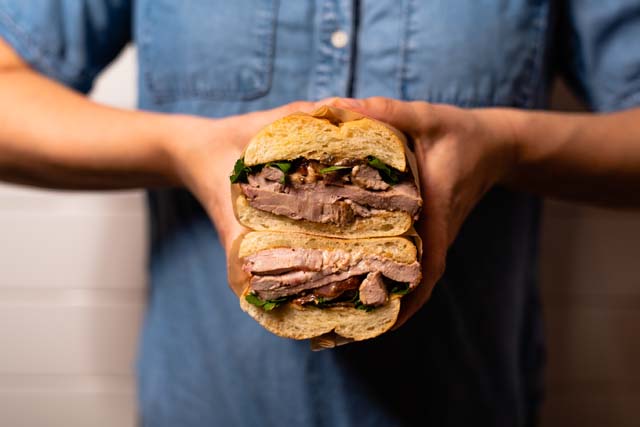