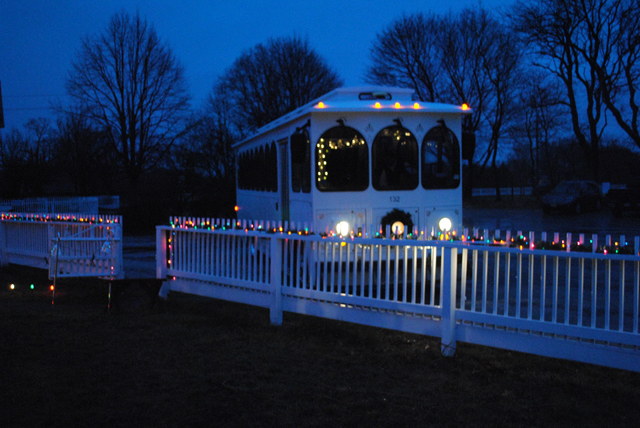 We may be in the midst of a heat wave, but it’s not too hot to start thinking about the holiday season.

At least not if you want to ride the Polar Express.

The North Fork Trolley’s annual tour will once again depart Riverhead’s The All Star bowling alley on multiple dates this November and December. The popular tour is bigger than ever for its sixth season.

The ride inspired by the 2004 film adaptation of “The Polar Express” will feature more performances by characters throughout the 90-minute excursion — bringing the film to life. Waiting for Santa to step out to give the first gift of the season will also be made more magical with singing and dancing at the North Pole.

“We used to pick up the people and take them to the North Pole to see Santa,” said Jay Mooney, general manager of the North Fork Trolley. “This year, it’s a whole production. They will be immersed in the Polar Express from the time they get there.”

Tickets for the tours, which have sold out in recent years, went on sale Tuesday. The first performance is set for Friday, Nov. 23, and tours run until Sunday, Dec. 23.

Attendance has grown since its launch five years ago. Last year, roughly 7,500 tickets were sold and this year Mooney projects 10,000 tickets will be sold.

“People loved it before, but they are going to love this even more,” Mooney said. “It is so much more fun. It is like being on the real Polar Express — it is not just going to see Santa.”

Due to its popularity, the tour also has a second pickup location at The Omni on County Road 39A in Southampton.

Tickets for the 2018 Polar Express Trolley Ride cost $55 each and can be purchased here. Participants must be age 2 and above. Pajamas are encouraged. Cookies and hot cocoa are also served. It may be August, but it is not too soon to starting thinking Christmas... Put on your pajamas and grab your golden ticket — The Polar Express is...

Thanksgiving is still more than a week away, but it seems Christmas is already on the horizon...