Executive chef Alexander Williamson is on a mission to make PORT Waterfront Bar & Grill in Greenport the No. 1 fast-casual dining destination on the East Coast. It’s an admittedly lofty goal, but one the veteran chef is confident is within reach.

The Rockville Centre native has more than 25 years of culinary experience. He trained at Johnson & Wales University in Providence before his career led him to work alongside top chefs like Tom Colicchio and at Michelin-starred restaurant Veritas in New York City. His résumé also includes stints at acclaimed Gramercy Tavern in the Flatiron District and Nick and Tony’s in East Hampton.

“We’re taking my history as chef — that is more tablecloth dinning than [PORT] — applying the same techniques and quality of ingredients, and making it more accessible to the masses,” said Williamson. “With the team we have in place, we can easily do it.”

Williamson served as executive chef at sister restaurant SALT on Shelter Island last summer and took over the helm at PORT when the waterfront restaurant reopened for its second season in the beginning of May. The entire menu has been overhauled.

The Amagansett resident said he’ll feature local ingredients when possible, but prefers to focus on quality rather than geographically sourcing.

French-style finesse is being incorporated into the seafood-forward New American offerings, with twists reflective of Williamson’s travels to Asia. Early standouts include the corn scallion lobster waffle — a riff on the Japanese street-style pancake — and two different lobster rolls, a classic version as well as a sweet and savory take with browned butter aioli and Granny Smith apples.

The new burger is a prime example of the chef’s effort to top fast-casual restaurant status. Williamson stacks two, four-ounce patties on a bun — instead of one large patty. “It comes out of the kitchen faster,” he explained. The burgers are served two ways: pink or not pink because “it takes the guess work out and gives the customer what they’re looking for.”

Perhaps most eye-catching is the new “experts only” selection with larger portions. The section comes with a warning: “Only attempt these dishes if you REALLY love food.”

Options include crispy whole fish tacos. The $42 dish is served head-on, tail-on, so only order it if you’re comfortable with digging into a whole bone-in fish. There’s also a foot-long lobster roll for $52 and a 40-ounce bone-in porterhouse priced at $110.

The crown jewel of the “experts” menu is the $500 Nickle Lobster Roll. The two-foot long lobster roll with foie gras butter aioli is topped with caviar and served with truffle fries and a bottle of Dom Perignon. All the dishes in this are designed to serve (at least) two, but they’re not judging if you want it all to yourself.

“The owners [Keith and Ali Bavaro] are big ‘wow’ factor type of people,” said Williamson. “They like to create good times and good experiences. They wanted to provide the biggest, best lobster roll they could. It is for a guy who wants to impressive is table … or as something a large party can split.”

The restaurant has been tailored to support the shareable dishes concept. New communal seating has been introduced to accommodate large parties in addition to regular tables for more intimate occasions.

Just don’t expect too much in the way of dessert. There is only one offering: a frozen key lime pie on a stick. The dessert is covered in 62-percent dark chocolate and topped with sea salt.

“We know that people want to eat and then walk around the boardwalk,” Williamson said. “You can take it and go. Our restaurant is meant to be a place where you can get something great to eat, experience a nice bottle of wine, have a great time and … go experience Greenport.”

PORT is now open Thursday and Friday starting at 5 p.m. and on weekends starting at 11:30 a.m. Starting June 15, the restaurant will be open 7 days a week with lunch and dinner service. These days, the North Fork wine trail draws tourists from outside of New York’s... 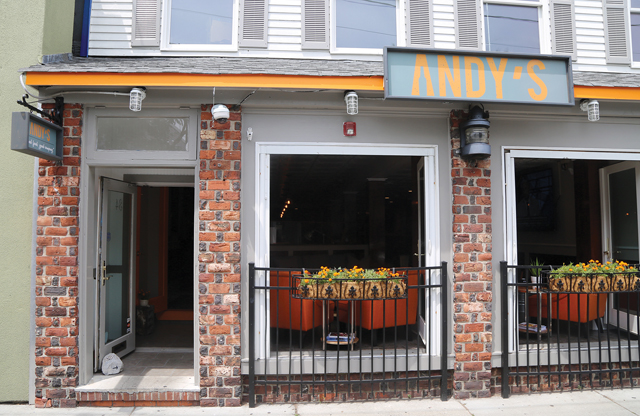 PORT Waterfront Bar and Grill is ‘What’s for Lunch’

Anyone familiar with the North Fork restaurant scene knows the tried and true spots...