The Elbow Room: Still exactly how you remember it Cliff Saunders III pulls up a seat at the bar of Cliff’s Elbow Room on Main Road in Jamesport. (Credit: David Benthal)

He had no job interview, so there wasn’t that moment of hastily pressing his shirt just before running out the door to meet his future employer. He wasn’t even given a heads up when it was time to start on the job, so he didn’t suffer an evening tossing and turning with anxiety before his first day.

For Saunders, owner of the trio of Cliff’s restaurants on the North Fork, his life’s work began one morning when he was 14 years old and his father dragged him out of bed.

“He threw me in the car and said, ‘You’re going to work,’ ” Saunders recalled with a wry chuckle. He’s been there ever since.

For the unfamiliar, the Cliff’s restaurants, which include the popular Elbow Room in Jamesport and the neighborhood haunts Elbow Too in Laurel and the Rendezvous in Riverhead, are models of consistency and throwbacks to a different time on the North Fork.

You can count on four things from any one of the family’s three eateries: subtle vintage charm, ice cold beer, a marinated porterhouse unlike any you’ve ever eaten and a Cliff running the show.

This Cliff is actually the third in a line of them. His father, Cliff Jr., was the name on the marquee for decades before him and his grandfather, Cliff Sr. (and grandmother Helen), launched the Saunders family into the restaurant business when they opened the Laurel Inn (now Elbow Too) more than 70 years ago.

Ask any repeat customer what they like about the restaurants and they’ll immediately launch into a déjà vu all over again soliloquy.

“You order something you like a year later and it will taste exactly the same as you remembered it,” said patron Jim Daniell of Hampton Bays, who paused for a moment before adding, “If not better.”

Daniell, who was waiting for takeout on an Elbow Room bar stool, first visited the Rendezvous when his daughter was a newborn. “She’s 20 years old now,” he said. When that restaurant suffered a kitchen fire that shut it down for the 2013 summer season, Daniell was impressed that Saunders kept his staff working at his other locations.
“You see that and you know this is a place that takes care of its own,” he added.

That’s probably why regular customers aren’t the only ones who keep coming back.

If you’ve ever eaten at the Elbow Room on a busy Saturday night, you’ve probably noticed waitress Carolyn “Carol” Keller … each and every time you returned since you were a child. The Westhampton Beach resident has been working the floor there since 1970.

Cliff Jr., who died suddenly in 2002, and his wife, Joan, opened the small but aptly named Elbow Room in 1958. The family legend is that Joan, now 90, came up with the clever name.

“She said it’s got nothing but elbow room,” her son remembers being told.

That location actually started as just a bar with a pool table before Cliff Jr. decided to staff the unused kitchen. “We had to cook up something,” he told Newsday in 1984.

The walls of that restaurant — no longer wood-paneled after a modest renovation in 2008 that also saw the carpet ripped out and the fish nets above the bar torn down — tell the story of a family, its business and the neighborhood it proudly serves. There are awards for Cliff Jr.’s work in the business community, Joan’s accolades from chowder contests and historic photographs of Jamesport.

A 1960s menu also adorns the wall, showing that the restaurant, often referred to as a steakhouse, though not one in the traditional sense, once offered only porterhouse — and it cost just $3.75.

That cut — which derives from the rear end of the short loin and features both tenderloin and strip steak — remains the restaurant’s most popular menu item, though they do serve a shell steak and a filet mignon as well.

The marinade is ultimately what defines the Elbow Room experience and lends its meat that charred look that makes even the rarest steak appears well done — until you take that first salty bite.

Saunders, now 58, said he marvels at how many customers order without even looking at the menu, knowing exactly what they want ahead of time.

“We even have a couple of regulars who order the baked clam dinner,” he said. “That hasn’t been on the menu in at least 15 years.”

That’s one of the few changes you might hear of at the Elbow Room. Asked about the biggest modification the restaurant has ever undergone, Saunders struggled to come up with an answer before remembering that in 1986 they began taking credit cards.

In reality, the biggest adjustments occur in the world around the Elbow Room. Saunders admits that while the restaurant — and really all of his locations — still do a good business, it’s not like it was in the old days, when Grumman workers spilled in for lunch or to spend their hard-earned pay with their best girl on the weekends.

Saunders draws a laugh with a yarn he spins about a time an F-14 pilot came in for lunch just before a test flight. He promised he’d wave as he flew overhead and Saunders thought he was joking until an hour later he heard a loud noise overhead and felt the restaurant shaking.

That North Fork is long gone, but you can still get a taste of it at one of the 14 tables or a bar stool inside the Elbow Room.

Rose, a bartender now in her second stint at the restaurant, says she came back three years ago after a decade away to find a familiar place.

“It was just the way I left it,” she marveled. “And for generations of customers, it’s still exactly what they remember.” 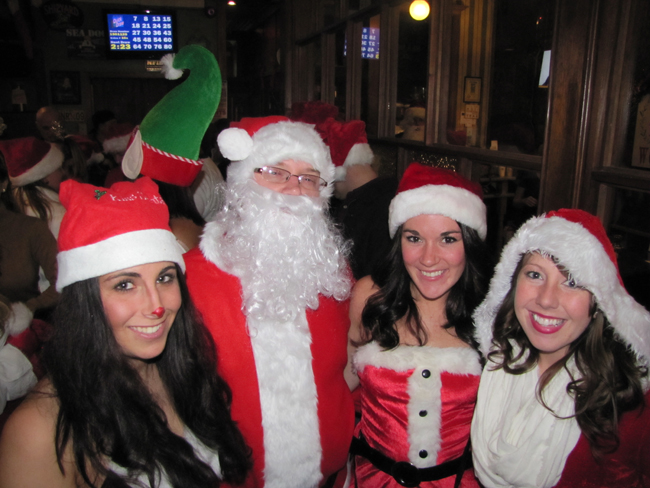 Where to watch the Super Bowl on the North Fork

Root for the Denver Broncos or Carolina Panthers right here on the North Fork with other...

Where to charge your electric car on the North Fork

The summer season brings more traffic and that means a wider variety of cars on...