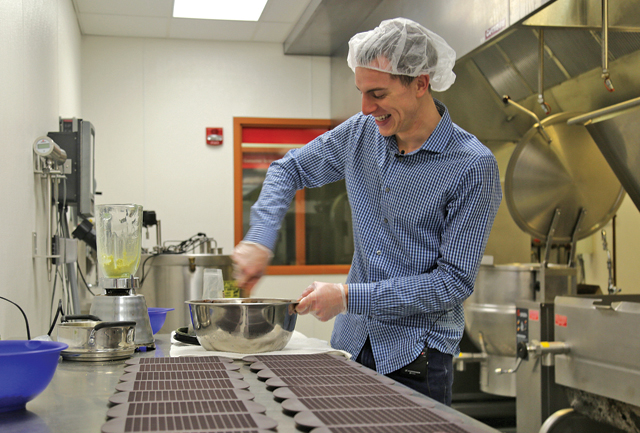 Ben Conard inside a kitchen at the business incubator in Calverton. (Credit: Krysten Massa)

Ben Conard, a 23-year-old entrepreneur, is creating a product at the Stony Brook University Incubator at Calverton that does more than taste good. His company, Five North Chocolate, produces sweets with a message that reaches far beyond Long Island.

The bite-sized snacks, infused with berries or nuts, are made with fair trade chocolate, which means its producers are guaranteed to be treated fairly for their work — a fair working wage, good conditions and no child labor.

Mr. Conard has been an advocate for fair trade products for about seven years. He’s raised awareness through various campaigns and also gave a TEDX Talk on the topic at SUNY/Geneseo, where he attended school.

Mr. Conard was awarded $10,000 for being named audience favorite at a “Shark Tank”-like competition called “Riptide: Hamptons $ink or $wim” in November. The contest was hosted by I-Hamptons, an entrepreneurial networking organization.

Mr. Conard said he’s excited and will use the prize money to rebrand packaging and stock up on ingredients.

Since creating his company almost two years ago, Mr. Conard has been busy making, packaging and selling the chocolate on his own.

He said the Stony Brook incubator has been an invaluable resource to live out this dream. He does not come from a food background but studied entrepreneurship and German. He came out of college with a grand idea but did not have the skills to execute it, until he found the incubator.

“It was really scary for me to jump into the food industry,” he said. “What was really nice is having a place like the incubator here in Calverton to really hold your hand through the things that you need to start a food company and working in a commercial kitchen.”

Mr. Conard can be found at the facility working late nights, coming in around 5 p.m. and staying for six or seven hours. He tries to go two to three times a week to make more chocolate in order to keep up with demand from retail stores that currently sell his products, including Shade Trees Nursery in Jamesport and the Cheese & Spice Market at The Shoppes at East Wind in Wading River.

His product is made with 72 percent cocoa. The most popular flavor is pistachio sea salt, but he also offers flavors like goji berry, coffee and coconut.

The company name embodies Mr. Conard’s overall goal. It derives from the coordinates for the part of West Africa where two-thirds of the world’s cocoa is produced.

However, millions of cocoa farmers in that region are impoverished because there is no fair trade.

Mr. Conard hopes to grow his business to where he can work directly with these struggling farmers.

He wants to use his business as a platform to inform people about where their food comes from.

“I think it’s important for consumers to start learning where [products] are coming from and then start questioning the authenticity of those ingredients and the brands that are sourcing those ingredients,” he said.

Mr. Conard said he’s grateful for how far he’s come with his company. He uses social media and attends local farmers markets to get his name out.

He said he especially enjoys attending markets on Long Island and in the city, where he can speak face-to-face with consumers and discuss the natural ingredients used in his chocolate.

“It’s important for me that people know that we’re really proud of what’s in our chocolate and that I do eat it myself and this is something that I would choose to eat myself,” he said.

In the near future, he hopes to expand his company and spread his message by marketing his product to retail stores, locally and across the country.

“I know I have to give it my all to make it work,” Mr. Conard said. “I’m doing my best and having fun along the way.”

In “A History of the World in 6 Glasses,” Tom Standege has this to...