Making the case for a beautiful grape: Uncork the Forks

Long Island merlot has and always will have a place in my cellar and in my glass. I drink it a few times a week, usually with dinner. It’s dependable and consistently good — even in all but the most horrid of vintages.

For many, that’s the point. That’s why so much of it is planted in the ground and why several producers have hung their hats on a grape that isn’t very sexy these days. One local writer has gone so far as to say, “Merlots are now considered the highest expression of the Long Island appellation.”

These other varieties may not be as good every year as merlot is — but their ceilings might be higher. I’ve long felt that diversity, especially in such a young region, should be celebrated. Why focus on a single grape like merlot?

I recently talked with my friend Amy Zavatto, executive director of the Long Island Merlot Alliance, to find out.

If you aren’t familiar with it, LIMA is a trade organization that “strives to promote the full potential of the Long Island appellation in producing superior quality, age-worthy, balanced, classic merlot and merlot-based blends to consumers and media worldwide.”

“The short, practical and easy answer is we grow more merlot on Long Island than any other grape because it’s consistent and takes well to our climate. All of which means there’s a pretty good chance we’re going to make really lovely merlot here — and we do! We make nice cab franc, too, but grow a lot less of it,” Zavatto told me.

That may sound a bit like “We have a lot of merlot, so we need to promote it” rather than something based on quality or passion, but that isn’t the whole story.

“Another part of our mission is to figure out why and how we do what we do, so we can continue to strive for high quality,” Zavatto said. “Last year, LIMA did a year-long study comparing Long Island merlot — both members and nonmembers of LIMA — with merlot from other areas of the world to see if some thread of commonality was sewn through Long Island, and there was. Which was very cool to see on paper.”

This year, the group has continued its research and Juan Micieli-Martinez, winemaker at LIMA member Martha Clara Vineyards, has taken the lead with a block registry program.

“We are recording data now. It’s holding everything from block planted, year planted, clone, rootstock, vine source and vine spacing to bud break, leaf set, different points of veraison, pick date — all that good, science-geeky stuff. It’s a lot of work, but I think we all really believe that it’s going to be an important source of information for us and all wineries on Long Island that grow merlot down the line,” Zavatto said of Micieli-Martinez’s work.

Zavatto and LIMA’s members know that to accomplish their various goals, they need to reach consumers and members of the restaurant and wine-shop trade as well. That’s why they’ve organized a new event titled “Merlot Rewind, set for this Friday, Nov. 6, at Back Label Wine Merchants in New York City. It’s an afternoon-and-evening event during which Long island merlot from LIMA members and nonmembers alike will be discussed during a seminar, tasted by members of the New York City wine industry and then enjoyed by members of the public.

The event is Zavatto’s brainchild and something she’s worked hard to pull together. I asked her, mostly jokingly, why she was putting so much effort into a merlot event and she said — perhaps directing her response directly at me, but I can’t be sure — “I got tired of seeing people roll their eyes at a beautiful grape.”

“I think regionally addressing the ‘merlot sucks!’ elephant in the room and laughing at it is something we just haven’t done,” she said. “We don’t need to prove anything anymore — our merlot in eastern Long Island is really lovely. Bright, beautiful fruit, solid tannic structure and great, lifting acidity, none of which needs to generally be monkeyed with in the winery. Our climate and conditions here hand us all the tools — and it’s right in New York City’s proverbial backyard.

“I love that we live in a place where we can get anything we want as far as wine goes,” she continued, “but it’s pretty cool to be reminded that along with that, you’ve got amazing wine made by incredibly talented people right here. Most people can’t say that. Oh, and hey! Our merlot rocks.”

It does rock and Zavatto is clearly the right person to lead LIMA. She almost convinced me. Almost. I just don’t know that Long Island is ready for — or needs — a “signature variety.” Let’s talk about it again in another 10 or 20 years. 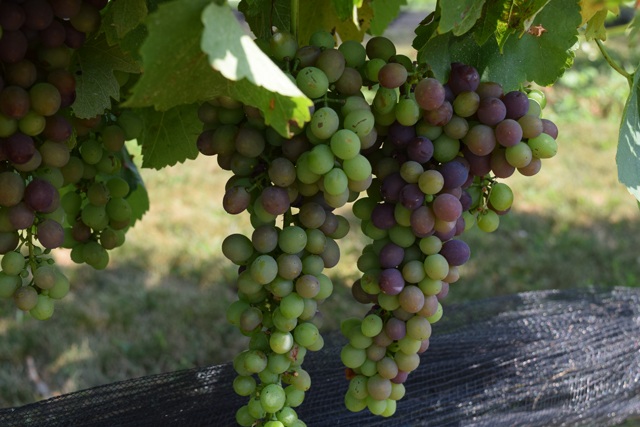 Uncork the Forks: The next great book for Long Island wine lovers

I’ve come across several books about and related to the Long Island wine community...